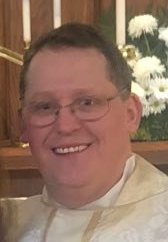 Rev. Michael S. Mobley has served Saint John's Church since 2013, and is dedicated to the teachings of Jesus Christ.

The Rev. Michael S. Mobley was born in southwest Virginia and was raised in northeast Tennessee. He is a graduate of the University of Tennessee, with a B.A. in History and earned his educator licensure in secondary education from Bryan College in Dayton, Tennessee.

Father Mobley received a Master of Theology degree in Historical and Systematic Theology from Dallas Theological Seminary in 2003, and a second one in 2005 from Cranmer Theological House in Katy, Texas. He was ordained a Deacon in April 2005 and a Priest in November 2005. He has served in parishes in Texas, Alabama, and Arkansas before accepting the call to be Rector of St. John’s in 2013.